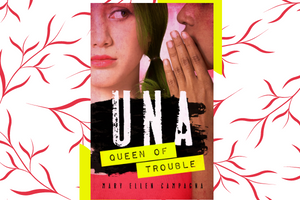 Join local author, Mary Ellen Campagna, as she discusses her new book UNA: Queen of Trouble. Books will be available for preorder at the event.

Una Zipley, the protagonist of this effervescent young adult novel by Mary Ellen Campagna, is an outspoken girl who attempts to hone some witchy talents. She’s the Caucasian child of an affluent family that relocates from Northern Virginia to a small city in Southwestern Virginia in the 1980s. There, as she matures, Una discovers the evils borne of discrimination and institutional racism aimed primarily at African Americans. Soon, she realizes that her best talent lies in activism; not occultism. She forms a group of concerned citizens who call themselves the (CHAG) the Creative Healing Activists Group. When two Gullah nurses come to work with the protagonist’s mother, who is a pediatrician, they both become close friends with Una and it is through one of them, Polithia Davis, that she unravels a long kept secret about herself. Consistent throughout the book is Una’s eager inquisitiveness and her willingness to uncover the truth. A heroine for our times, she always acts upon it, regardless of the cost.

The author was reared in Northern Virginia. She earned both her undergraduate and graduate degrees in English and Liberal Art Studies at Hollins University in 2000/’02, and did graduate work in education at the University of Virginia.

For several decades she was a school teacher and a freelance journalist. Her history of covering city council and community meetings for newspapers in the Roanoke and New River Valleys of Virginia led to her research on racism in the area. She marched with Dr. Martin Luther King, Jr. as a child and was there in 1963 to witness his “I have a Dream Speech.” She also researched environmental racism while teaching in South Carolina.