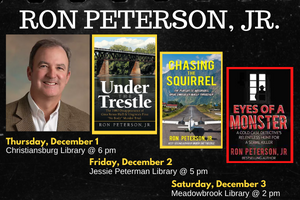 Bestselling author, Ron Peterson Jr. will discuss his latest book, Eyes of a Monster, as well as updates to his previous books, Under the Trestle, and Chasing the Squirrel. Books will be available for purchase. There will be time for discussion and questions. This event is free and open to all.

Ron Peterson Jr. is a Virginia-based author whose best-selling true crime books explore compelling mysteries and consistently receive five-star reviews. Peterson’s first book, Under the Trestle was selected as one of the Top 100 true crime books of all time and is currently in development with Mactavish Pictures as a documentary film or series. Under the Trestle is based on the local case of Radford University student Gina Renee Hall who disappeared in 1980. Stephen Epperly was later arrested and sentenced for her murder, making it Virginia’s first ever “no-body” murder trial.

Peterson followed with Chasing the Squirrel, the true story of notorious drug smuggler Wally Thrasher, also a case well known to the New River Valley. Thrasher and his wife Olga lived in the NRV while he flew out of Florida and became one of the most-wanted drug smugglers by the FBI. Thrasher supposedly died in a fiery plane crash an investigation proved that it had been staged. Peterson’s book has been optioned to Los-Angeles-based Urban Legends Film Company for development as a television series.

Peterson's latest book, Eyes of a Monster, explores the previously unsolved 1981 cold case murder of Hampton, Virginia schoolteacher Olivia Dare Christian.  In 2011, the case was re-opened by detective Randy Mayer, who with FBI assistance uncovered a suspect believed to be a serial killer.

Ron Peterson will speak at: